Two studies published in Nature Communications reveal the portal structure of the Epstein-Barr virus and bacteriophage T7. No treatment is currently available for the infection caused by the Epstein-Barr virus, which, in addition to causing mononucleosis, leads to various types of cancer. 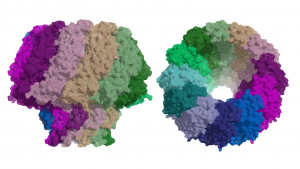 Scientists at the Molecular Biology Institute of Barcelona (IBMB-CSIC) and the Institute for Research in Biomedicine (IRB Barcelona) led by Miquel Coll have published a study in the journal Nature Communications revealing the structure of a key protein, known as a portal, in Epstein-Barr virus infection. The Epstein-Barr virus, whichbelongs to the herpesvirus family,is one of the most widespread human viruses and the main cause of infectiousmononucleosis (also known as glandular fever). In addition, it causes several kinds of cancer, including Burkitt and Hodgkins lymphoma, stomach cancer and nasopharyngeal cancer, as well as several autoimmune diseases. There is currently no treatment for infections caused by this virus. Understanding the structure of the portal protein could prove useful for the design of inhibitors for the treatment of herpesvirus infections such as Epstein-Barr. All herpesviruses have a similar infection mechanism. Having entered the cell and reached the nucleus, the viruses release their DNA, which can remain latent for years until certain conditions trigger its replication. After this process, DNA is then introduced into new viral capsids, thereby forming new viruses that can attack other cells. The portal protein is the route through which DNA enters the viral capsid and through which it leaves to infect cells.

In a second study published in the same journal, the researchers have also characterised the structure of the portal protein in bacteriophage T7. This phage is a virus that infects only bacteria and, interestingly, its DNA packaging system resembles that used by herpesviruses. In both viruses, the portal protein comprises 12 subunits, forming a large mushroom-shaped structure, with a central channel through which DNA passes. This channel has a valve that regulates the entry and exit of the virus’ genetic material.

To study the structure of these proteins, the researchers used both synchrotron X-ray diffraction and high-resolution cryo-electron microscopy. Both studies were performed in collaboration with the CNB-CSIC and the University of Oxford (UK).

Awarded Tender. Project co-financed by ERDF, within the framework of the ERDF Operational Program of…

Any cookies that may not be particularly necessary for the website to function and is used specifically to collect user personal data via analytics, ads, other embedded contents are termed as non-necessary cookies. It is mandatory to procure user consent prior to running these cookies on your website.